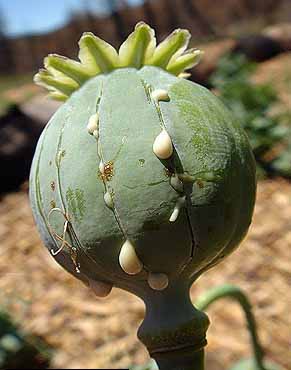 The plant AHIPHENA or GASGASE as it is commonly known in Kannada is an annual plant from which the exudate are obtained from the raw fruit. This exudate is known as OPIUM or Aphim. This is classified as a narcotic drug as it has the capacity to produce hallucinations along with addictions. In Ayurveda, this plant is only employed after its mention in the later Nighantus especially the Madanapala Nighantu. But this has been used in the formulary from then till date with certain formulations namely AHIPHENASAVA which is available today. As it is a narcotic drug, the use is restricted and is only done when it is essential. But its seeds are non-narcotic and is very easily available in general stores. It is very commonly used as spice in the name of GASGASE where the puddings and other delicacies are prepared. Still for the purpose of knowledge, its propagation and benefits are presented in the small video along with general requirements for its cultivation and propagation.

The details and the description is available in the page with the title AHIPHENA in a very elaborate manner. The video which emphasises on the various aspects of the plant especially with respect to its cultivation and its relative medical benefits. Its use is as a anti-inflammatory and analgesic drug is well accepted by Allopathy too. It has resulted in identifying a class of pain killers known as OPOID drugs that are used to control or suppress high intensity pain as in case of fractures. Thus, a short and a crisp video is being attached here. This being the second video after AGURU and AGNIMANTHA, we will be coming up with such videos of different plants with the objective of spreading knowledge and awareness. The medicinal details and others with respect to Ayurveda is explained in the page AHIPHENA with under the Know your medicinal plants section. There are much more to follow. Hope you all will like it. If yes kindly subscribe and follow our videos in our YOUTUBE CHANNEL. You can also follow at Facebook and in LINKEDIN. Do like it there too and follow us to get many videos of Ayurveda too. Thank you and Happy reading !!!!!!!!!!