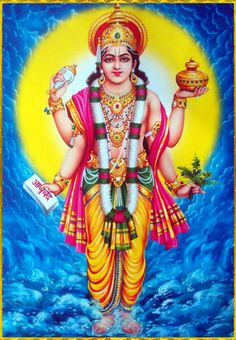 Ayurveda the science that originated with the dawn of creation of living organisms on earth. It is believed that it was present but eventually only remembered for the betterment of human lives when it was actually needed by Lord Brahma who then taught his son Daksha Prajapati. He in turn passed on to Ashwini Kumaras who turned out to be Celestial physicians. There are many stories regarding their skills and treatments done to different people who have requested them to do so. These celestial physicians then passed on the knowledge to the King of Gods, Lord Indra. So this way the science was just in the heavenly abode catering their needs. But when human beings suffered from diseases and were feeling very difficult to live, a great sage Bharadwaja as sent to Lord Indra to get the science of life “AYURVEDA” to earth. Eventually when Sage Bharadwaja went to him and requested, it was accepted and transferred for the betterment of humankind.

But there is another version of the story too where the Lord of Ayurveda namely Lord Dhanvantari is held responsible for the origin as he had emerged from the churning of the sea done by the Gods and Demons along with the jug of nectar (Amruta). It is further said that he again incarnated himself as Divodasa Dhanvantari the king of Kashi and then promoted the science in a large way to all the those who were interested.

The two versions belong to two school of Ayurveda namely the Atreya School and the Dhanvantari School which is predominant with kayachikitsa or General medicine and Shalya or Surgery. Great scholars namely Acharya Charaka and Acharya Sushruta belong to these two schools of Ayurveda respectively.

The details of the Atreya School has been summarised in a most amicable way in the video that is being attached. The video is one among the series of information that is for the general public to create awareness about this great ancient system of medicine that will be published by www.ayursoln.com. There are much more to follow like the previous ones. Hope you all will like it. If yes kindly subscribe and follow our videos in our YOUTUBE CHANNEL at https://www.youtube.com/c/MaheshTS1975. You can also follow at Facebook at https://www.facebook.com/ayursoln. Do like it there too and follow us to get many videos of Ayurveda too. Thank you